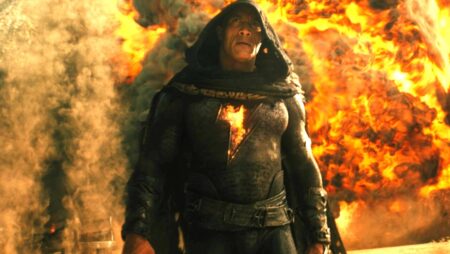 Black Adam is coming to Fortnite as a skin

Black Adam is coming to Fortnite. This was announced by Epic Games and Dwayne Johnson via Twitter on Tuesday night. To celebrate the premiere of the film developed by DC Films and New Line Cinema, players of the battle royale can purchase a special skin.

Fortnite Chapter 3 Season 4 launched several weeks ago. The fourth season of this chapter has already brought with it the necessary innovations and the developer is simply continuing this line. Thus, Fortnitemares will launch next week and several skins, including Black Adam will be added to the game.

Dwayne „The Rock“ Johnson shines as Black Adam in the movie of the same name. The lead actor shared a short teaser of the new Black Adam skin being added to Fortnite on Tuesday night last. ‚The man in black takes Fortnite‘ reads the accompanying text.

Tune in TOMORROW to the #BlackAdam WORLD PREMIERE livestream on Twitch @ 6:30PM ET and catch the bad ass reveal of the #ManInBlack in @FortniteGame!

On the night of Wednesday to Thursday, at 00:30, the world-famous actor will provide a full reveal of the Black Adam skin in Fortnite. A week later, on Oct. 21 at 02:00, the skin will be available in the item shop. It is not yet clear how many V-Bucks it will cost.

This is not the first time Dwayne Johnson has been available in Fortnite via a skin. After all, „The Foundation“ was added to the battle royale in February of this year. At the time, this skin was unlockable through the battle pass.

Black Adam is a movie based on the comic books by DC Comics about the superhero of the same name. This character received unique powers from some gods thousands of years ago. He was then imprisoned and now that he is free, he takes revenge. Black Adam can be seen for the first time in the Netherlands on October 19.