With eSports betting now being big business, a number of traditional bookies have got in on the act. One of the first to do so was Betway. Their dedicated eSports betting platform was launched back in 2016, offering a variety of markets and features to gaming punters. Licensed by the Malta Gaming Authority and Gambling Commission, Betway is a site available to customers in a variety of countries. For those wishing to find about more about how eSports betting works at Betway, this review provides everything in which there is to know. Let’s begin by outlining the main pros and cons of the bookie when it comes to eSports.

Betway was founded in 2006, with the company being based in Malta, while offices are also found in Guernsey and London. Richard Akitt is the current CEO, with Betway holding a gambling license from the leading authority in both Malta and the UK. Their dedicated eSports page was introduced in 2016, adding to their detailed sportsbook and casino offerings. Betway became the official sponsor of eSports organization Ninjas in Pyjamas in late 2016, a deal which saw millions invested into the team. Betway are also the main sponsor of English football team West Ham United, along with a host of horse races.

Which eSports Does Betway Cover?

Betway covers all major eSports events, as well as tournaments which take place at a regional level. The most popular markets include CS:GO, League of Legends and Dota 2, however Starcraft, Heroes of the Storm, Overwatch and the newly launched Valorant can be found too. Others can be found from time to time too, with major events from the World of Tanks, FIFA, Fortnite and Hearthstone scene being available to bet on. While their list of available eSports markets is not as extensive as some specialist sites, it remains better than the vast majority of traditional bookies. 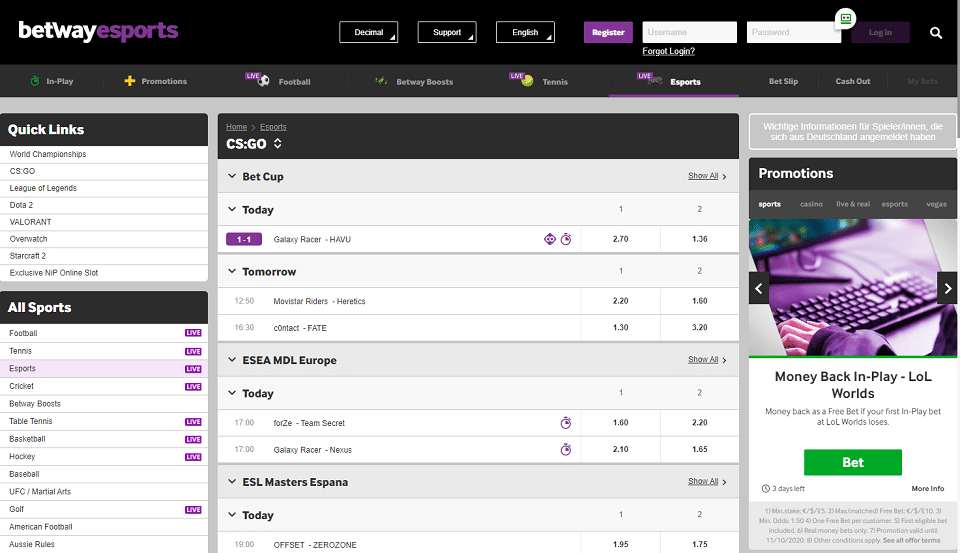 On top of this, there are a number of different bets available to eSports fans, including match winner, map winner, first blood, correct score and handicaps. The exact number of markets will likely depend on the profile of the event, with The International and League of Legends World Championship in particular coming with a large variety. Meanwhile, live eSports betting markets are also available, something in which we will look at in further detail later on in our Betway review.

Finally, with Betway being the sponsor of Ninjas in Pyjamas, a series of specials surrounding the organization can be found too. Such markets include individual player kills, which are attractive to those with an excellent knowledge of the team.

Odds at Betway can be viewed in in fractional, decimal and American formats, which are popular in Europe, the UK and United States respectively. In terms of prices, there is value to be found on a regular basis for those in the know about the eSports scene, especially when it comes to betting on the so-called underdogs. A quick look at odds comparison sites also shows that Betway regularly offers more appealing prices than many of their competitors. As such, those placing winning bets know that they are receiving the best possible rewards.

Punters will also be pleased with the betting limits found at Betway. Bets can be placed at as little as £/$/€0.10, which caters well for beginners. Meanwhile, the maximum bet accepted ranges between markets and events. However, with maximum winnings of £/$/€100,000 per day, even the needs of the most demanding of punters should be met.

Promotions are available to both new and existing customers at Betway, starting with their eSports welcome offer. Punters in the UK will see their opening deposit 100% matched up to £10. The bonus will be paid out in the form of a free bet, which must then be wagered x1, at odds of at least 1.75, before it can be withdrawn. Only deposits made using a debit card or PayPal will qualify. For those elsewhere, the same terms and conditions apply, only this time, a free bet worth up to $/€30 is up for grabs.

For existing customers, the Betway eSports free bet club could well be worth taking advantage of. Here, punters placing £/$/€25+ on eSports doubles, trebles or accumulators will receive a free bet worth £/$/€10. In order to qualify, minimum odds of 3.0 must be met. Meanwhile, Betway offers daily eSports price boosts, while money back specials on major events can also be found now and then. Such promotions help to separate Betway from other eSports betting sites.

Betting on eSports matches that are already underway is possible thanks to the live betting markets found on their site. While this was not initially a service the bookie provided upon the introduction of eSports, live betting was recently added. Odds here are updated on a regular basis, based on what professional players are doing, whether it be a kill made in Dota 2 or a goal being scored in FIFA.

Many eSports markets at Betway are accompanied by live streaming too, with punters having to have at least £/$/€10 in their account to gain access. Streams generally come from CS:GO, Dota 2 and League of Legends markets, with clicking on the “Watch” button making it easy for customers.

The Betway eSports site has a similar look and feel to its main sportsbook page, with a black and purple color scheme dominating throughout. The sleek design is easy on the eye, while the interface makes it easy to move between markets and features. The sites top menu features links to live betting markets and promotions, with all available eSports markets being listed down the left-hand side of the page. Imagery is used sparingly, while unnecessary graphics are not found at all, adding to the cleanness of the site. The Betway eSports site also works well on mobile devices, while a betting app is also available to download on iOS and Android devices.

Betway is licensed and regulated by the Malta Gaming Authority and UK Gambling Commission, as well as authorities in a host of other European countries. This means that they have already undergone strict testing. As such, customers can rest assured that Betway offer a safe environment when it comes to online eSports betting. Betway is also associated with gambling regulators such as IBAS and ESSA, who help to ensure that all offerings are fair and reliable. On top of this, your personal details will never be shared with third parties, while encryption technology helps to keep all payment information safe. It is only those in the following countries who will be unable to register at Betway:

Only real money eSports betting is available at Betway, with customers being able to fund such activity using a number of payment methods. Deposits are instant and start at just £/$/€5, while withdrawals will likely take anywhere between 1-5 working days, with no fees being charged in most cases.

The following are the total payment methods available to eSports customers at Betway:

Support is available to customers at Betway 24/7, with communication being initiated via telephone, email or live chat. Emails sent to [email protected] are generally responded to within 48 hours, while agents are accessible via live chat in under 30 seconds in most cases. Support is also available in 15 different languages, demonstrating just how much of an international operator Betway now is. A detailed FAQ page can also be found on both desktop and mobile, providing useful information regarding betting rules, bonus terms and other topics.

Those signing up at Betway will also be in a position to play their CS:GO-based slot game, which is dedicated to Ninjas in Pyjamas, who as we have already mentioned, Betway is the main sponsor of. The game was developed and introduced in the hope of closing the gap between casino and eSports, with the Ninjas in Pyjamas logo appearing throughout. Customers can take advantage of the Betway sportsbook too, which covers sports from around the globe.

Betway is one of very few traditional and long standing bookies to have a dedicated eSports betting page. As a result, it comes as little surprise that Betway has long been held in high regard by eSports enthusiasts, with the operator covering a large number of international and regional events. With a generous welcome offer, ongoing promotions and live streaming to look forward to, we really do recommend checking Betway out for yourself. Everything from CS:GO and League of Legends to World of Tanks and FIFA can be bet on at Betway, while their site is nothing but 100% safe and reliable. With a variety of payment methods to choose from, punters in a host of countries can take advantage of what Betway has to offer thanks to different gambling licenses. We did not really come across any major faults at Betway, something which is rarely the case in these reviews.

Which eSports markets are available at Betway?

Betway covers events from the world of CS:GO, League of Legends, Dota 2, Starcraft, Overwatch, Hearthstone, World of Tanks, Heroes of the Storm, Valorant and FIFA. Meanwhile, new eSports events are being added at a fairly rapid rate, meaning that you are almost certain to find something to suit your needs.

Is live streaming available at Betway?

Yes! The majority of eSports matches found at Betway come with live streaming, with customers having to have a funded account in order to gain access. Streaming matches makes the betting experience all the more exciting.

Does Betway offer a welcome bonus?

Yes. The welcome bonus available at Betway comes in the form of a free bet. The exact amount available depends on your location, however it is likely to be either £10 or £/€30. Be sure to check out the terms and conditions before signing up.

Is Betway legal where I live?

Betway is licensed and regulated by the Malta Gaming Authority and UK Gambling Commission. This means that their site legally accepts bets from customers in a number of different countries. We listed restricted countries further up on this page.

What other services does Betway offer?

On top of their dedicated eSports betting site, both sportsbook and casino offerings can be found. This means that Betway is something of a triple threat, catering for the needs of customers in all areas.